Ok, ok, it’s summer, and Brooklyn always looks its best in the sunshine, but I think I’m in love with Bushwick. I have to be honest, I spend 97% of my time in Manhattan, and I’ve only really wandered around Bushwick during the Open Studios last weekend (June 5-7)… but I still feel the butterflies in my stomach. 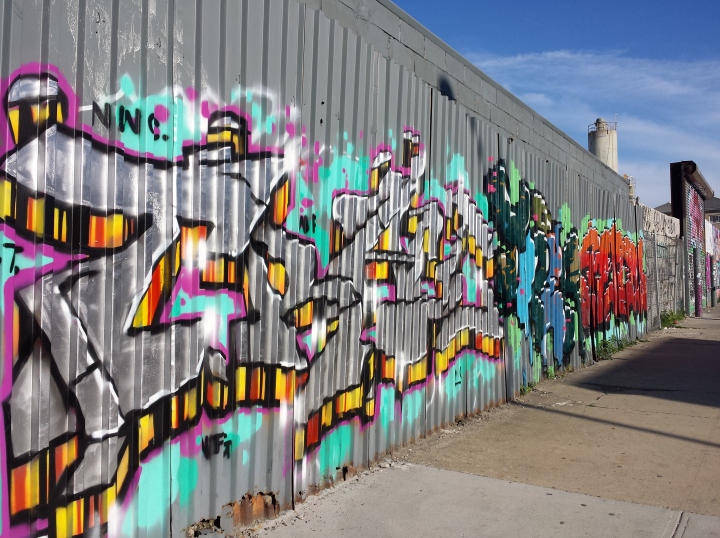 Though I liked imagining a whole artist commune with people constantly collaborating on projects, most artists told me they hardly venture out of their studios. Still, I found someone who “falls in love every day”, and what can be better than that?

(This wasn’t the artist who “falls in love every day” by the way. However, I didn’t ask) 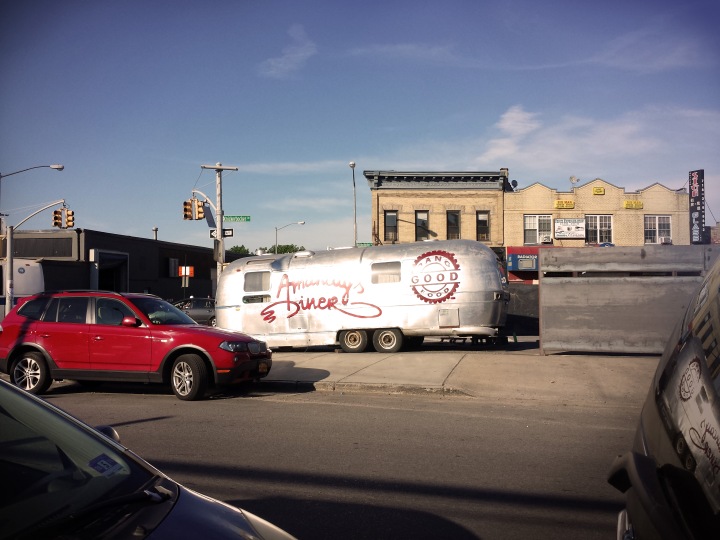 I covered only a sliver of Bushwick, but along Morgan Avenue —between the Grand Street stop and Grattan— I found some pretty notable studios and artworks.

The ISCP studios at 1040 Metropolitan Avenue were my first stop (Floors 1-3):

I’m a sucker for installation art, so of course the following studios intrigued me: 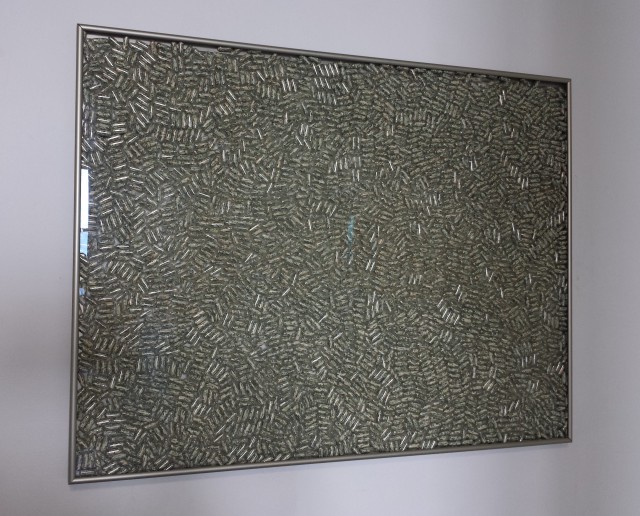 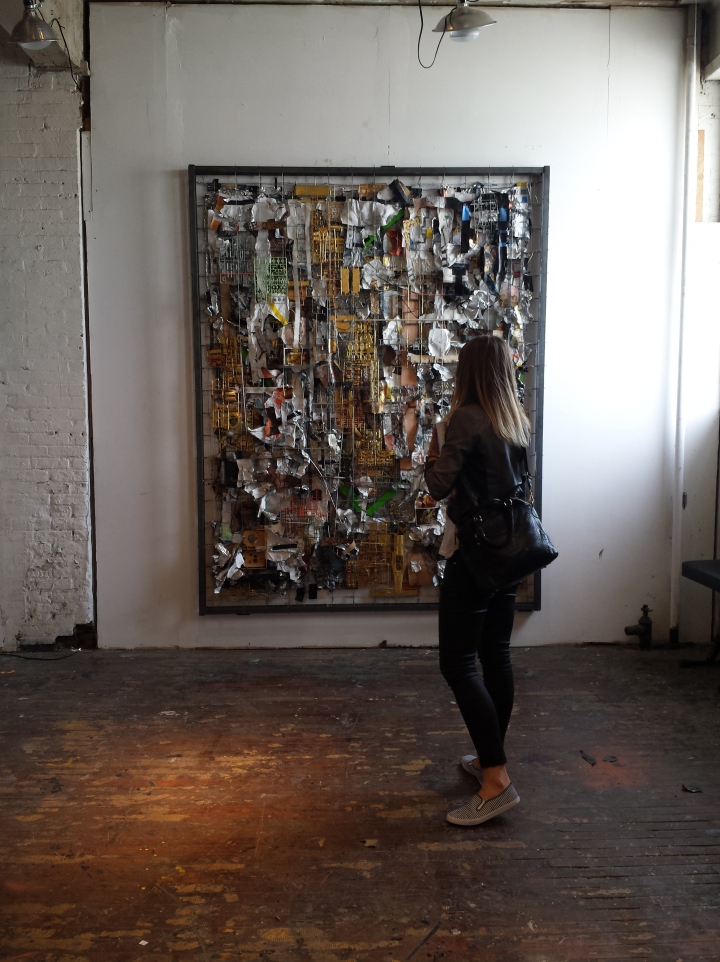 Stopped by a studio shared by three artists, but I was only able to get Desiree DeLong‘s business card: 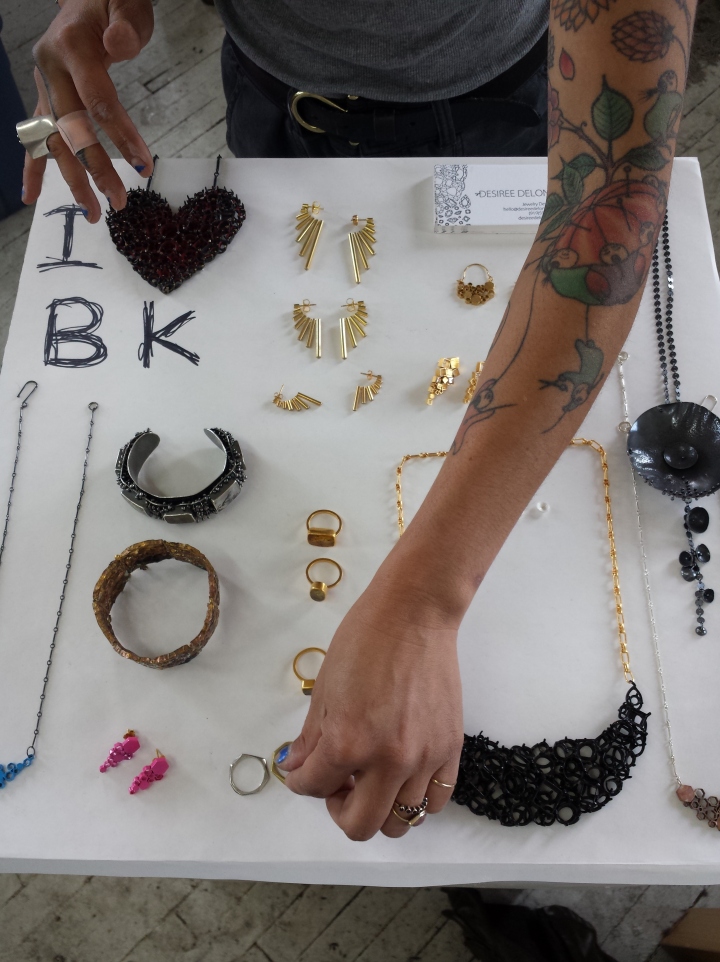 Great thing about Desiree is that not that long ago she was working as an ICU nurse! She and her fellow designer (work is below) will soon be offering jewelry design classes, in case you are interested in metalsmithing. 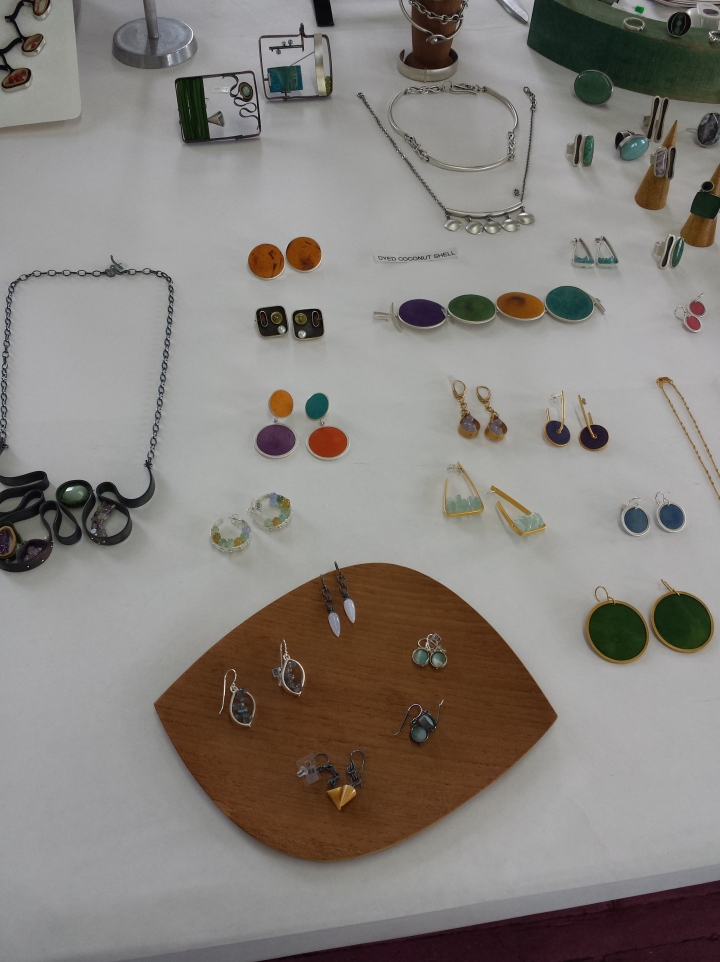 On my way to Roberta’s, I stopped by Andrew Erdos‘ studio(s):

I met Andrew in 2008, and he never ceases to amaze! Working primarily with glass, his artwork explores the social construction of artificiality and its place within nature.

Across the street in a closed garage space, his three large glass sculptures illuminated the room:

Erdos successfully generates a sensory overload for the viewer by encapsulating his psychadelic worlds within interior-lit mirrored cubes.

I later wandered through a few other studios, marveling at the space:

And then into Cec LePage‘s studio, where she creates her whimsical lucite sculptures: 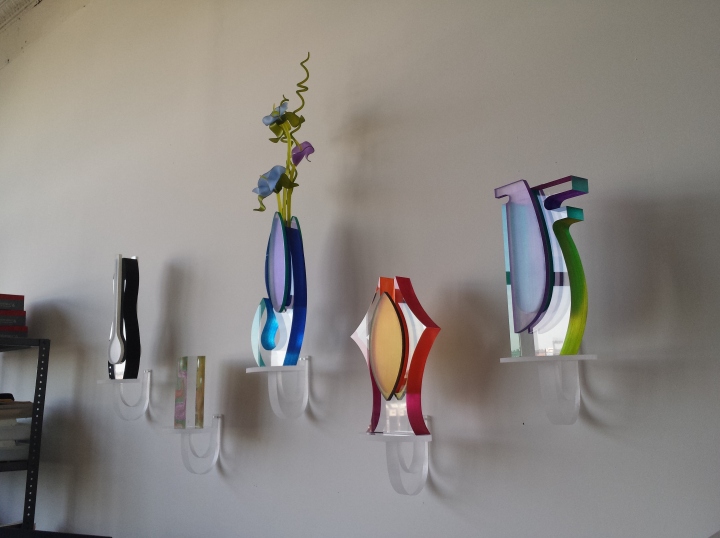 And last but not least, I couldn’t leave without visiting Reet Das‘ studio at 117 Grattan Street! 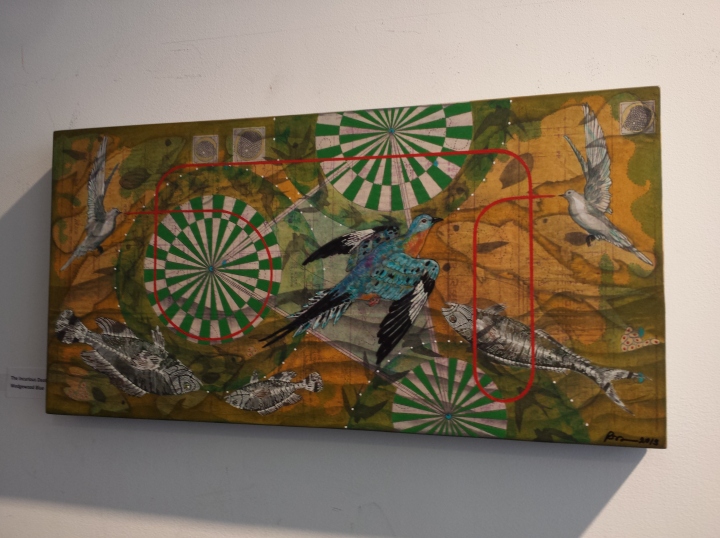 If you don’t know of his work, it’s quite remarkable. He creates each image over lengthy periods of time, layering paint of varying degrees of opacity to create his multi-dimensional, and highly-detailed paintings:

The meticulous detail in each work calls to mind the traditional Indian art of miniature painting.

I was excited to learn that Lee Quiñonez‘ studio was here too: 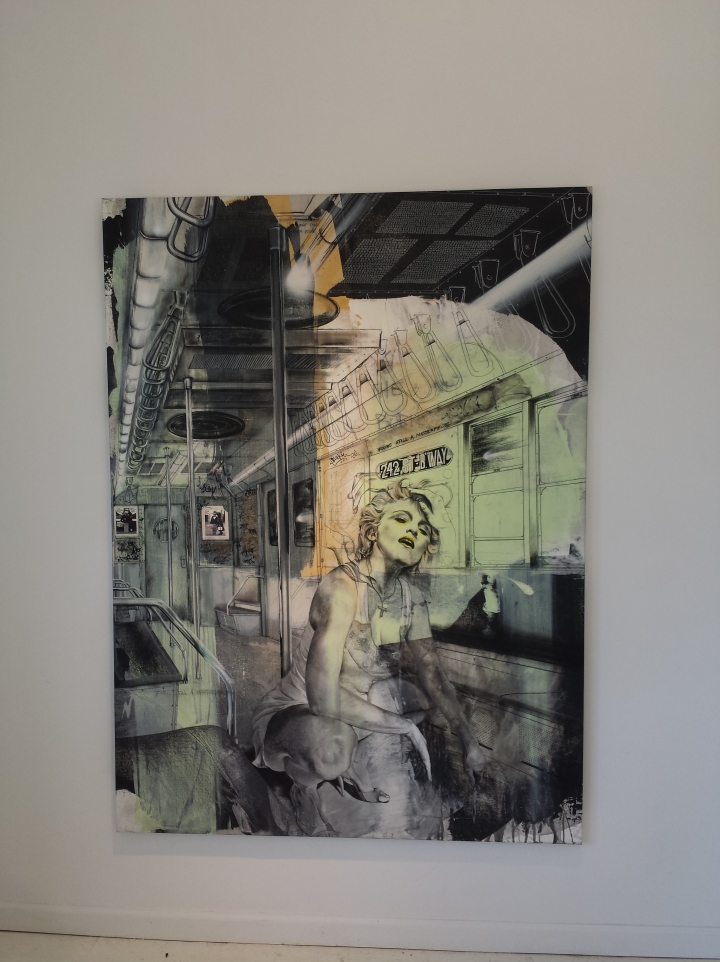 And on the way out, I walked into the studio of Jason Yarmosky, whose hyperrealist paintings are so delicate and beautiful (click on the second image to see the details): 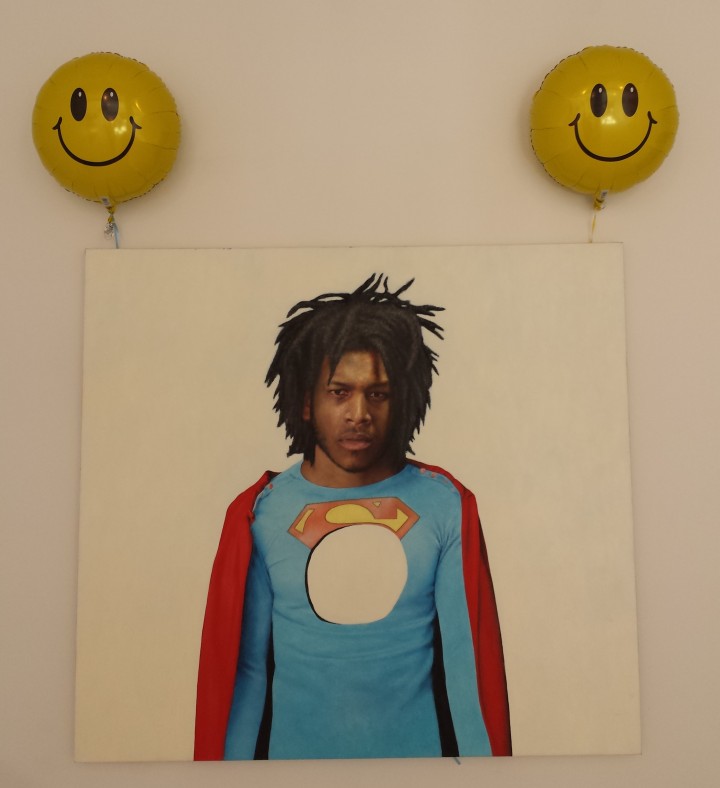 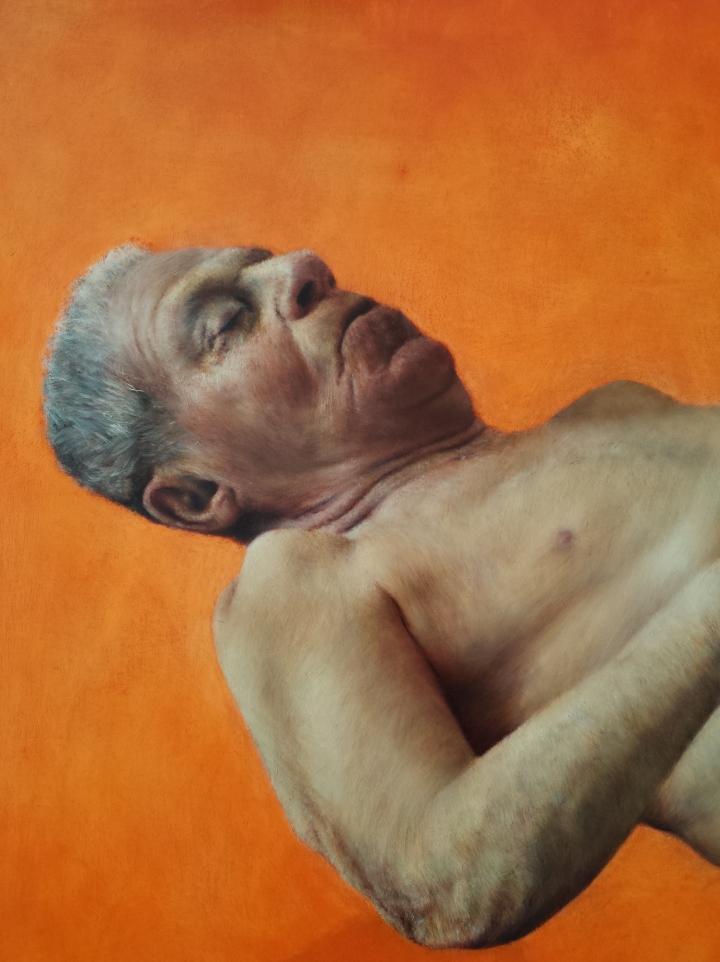 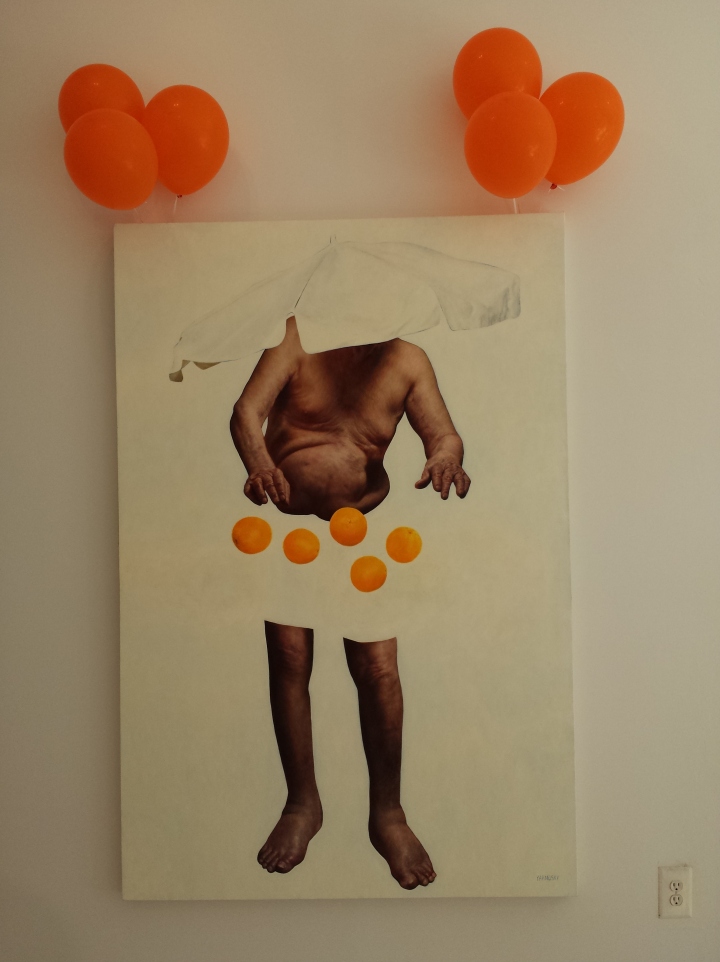 And the studio of an Argentinian artist whose laborious process involves using such mixed media as cowhide, glass, and textiles: 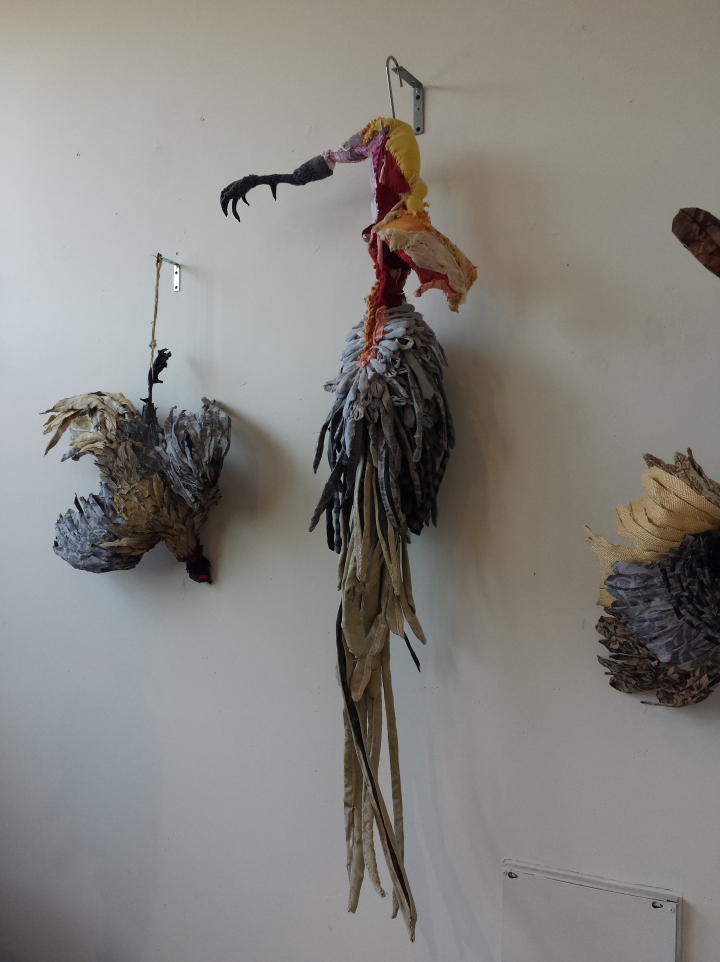 I’ll leave you with the following image. This piece, made mostly out of cowhide, was particularly arresting. What an image… of Manhattan growing out of the cavity or nerve of a tooth. Just looking upon that raw, carnal image made my teeth hurt:

Makes it seem as though Manhattan is the rot that grows within the bone, an artificially shiny growth burrowing inside the decaying fossil of our bedrock.

I don’t really think that— what a depressing image! I just got carried away…

Here’s another photo of that toothache:

Actually, from this angle it looks like something else; More in the direction of “feminist art” instead of gloom and doom, but still quite raw.

4 thoughts on “Bushwick Opens its Studios”