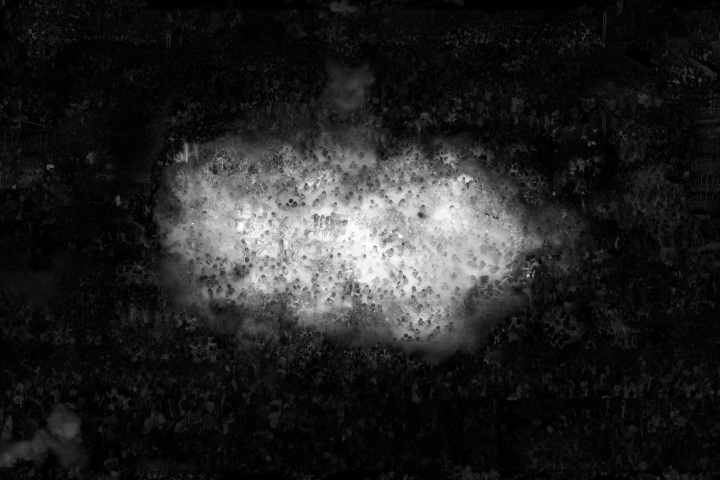 On June 28th, Wirth Art Advisory, in collaboration with Ana Tzarev proudly presented Group Portrait, the 2012 Yale MFA Photography Thesis Show, curated by Sabrina Wirth. The exhibition is a New York debut for artists Peter Baker, Richard Choi, Felix R. Cid, Thomas Gardiner, Pao Houa Her, Katie Koti, Kate A. T. Merrill, Sarah Muehlbauer, and Maayan Strauss, and will be on view until  July 21, 2012 on the second floor of the Ana Tzarev gallery located at 24 West 57th Street. The opening reception was a great success, with more than 500 people in attendance, sipping on GuS (Grown up Soda) cocktails, prosecco, and wine, while viewing the beautiful artwork. On July 12th from 6-8pm, there will be an informal discussion with the artists and art critic Rick Moody. Duggal Visual Solutions was a sponsor that printed and mounted Maayan Strauss and Tom Gardiner’s photographs, Niche Marketing & Promotions provided all the wall text, and GuS (Grown up Soda) was our drink sponsor of the evening.

Every year, the Yale MFA graduates work together to publish a book that is to serve as a record of the artwork they produced during their rigorous 2-year MFA program at Yale University. This year the nine students, taught by Gregory Crewdson, the director of Studies in Photography, not only have a beautifully bound publication of their photographs, but also have an introductory essay written by renowned art critic Rick Moody. Titled “Group Portrait” (the inspiration behind the exhibition title), the essay is itself an intimate portrait that carefully reveals each artist’s personality and character. Moody describes the class of 2012 as “a group that stands for itself as group”, one that is bound together by respect and admiration for each other. Although the group is so cohesive, each individual member could not be more unique in his or her own background and exploration of photography. And yet, similarities are apparent within the photographs when seen together, and it is these similarities that have shaped the curatorial plan for the exhibition.

The journey through the MFA show begins with the trip up to the second floor. Guests that enter the glass elevator are immediately confronted with Felix R. Cid’s life-size “Venuses”. The massive LED screen displays the image of upright sleeping bags that breathe in and breathe out alongside the real-life breathing passengers, giving the sensation of intruding into someone’s personal space. The colorful images play on a loop and conjure up feelings of sexuality, psychology, and social context; themes that are noticeable in each artist’s body of work.

Cid’s work continues into the first gallery where they face the photographs of Peter Baker in a dialogue about time and composition. Here, Cid photographed each of the images – the protests in Madrid, the crowds at the bullfights in the Bull Ring in Madrid, and the foam parties in Ibiza – from different angles. The resulting work is an image rich with overlapping moments of time, that from far away appears as constellations in space. Similarly, Baker’s bold images capture a moment that exists for only a split second, freezing an urban landscape layered with multiple reflections and meanings that can only be appreciated in a still picture.

In the second room, the works by Maayan Strauss and Sarah Muehlbauer exchange ideas about nature, false appearances and displaced objects. Most of Muehlbauer’s photographs reveal only the traces of human culture living within nature, creating a strange sensation of an abandoned landscape. Strauss’ work explores the surfaces of objects and plays with the notion that what is literally beneath the surface is completely different from what is revealed to the world. For example, one of the works in her installation at Yale University was a large marble panel attached to chip board, leaning against a metal stand. However, the marble panel was actually a print of the marble surface wrapped around MDF board, and the back of the panel, which appears to be chipboard, is really a print of the material as well.

In the third room, the works by Pao Her, Kate A. T. Merrill, Richard Choi, Katie Koti, and Thomas Gardiner are exhibited. Most of the work in this room is an intimate glimpse into each artist’s life and -out of all the artworks in the thesis show- the most focused on the human psyche. Her, a Hmong refugee from Laos presents her photographs in the traditional Hmong tradition, but with almost an outsider’s perspective. The subjects in the photographs almost seem to be self-conscious, and in her own self-portrait, Her reveals a subtle smile that is Mona Lisa-like in that the viewer has to wonder if the smile reflects irony, shyness, or mockery. Merrill’s photographs, possibly the most intimate of all the photographs in the room, are small in size and invite the viewer to take a close look at her family. Far from being self-conscious, the subjects confront the viewer straight on and give the observer the sensation of being the observed. Absent from all the photographs, however, is Merrill herself, who removes herself from her private family portrait and keeps herself as the anonymous spectator. Koti’s photographs, in contrast, are a study of her own role within her adopted family. With saturated tones and compositions reminiscent of Sally Mann, the scenes are all part of a narrative that when placed together illustrate the dynamic of the close-knit familial unit.

Finally, the photographs by Gardiner and Choi take a step back from family-centric themes: the focus instead, is of people. Choi’s photographs are still images created from his video; special moments that are captured twice, once through video documentation, and then again through the shutter of his camera. The juxtaposition of Choi’s video with his photographs allows viewers to feel included in the creative process; they are not only able to enjoy the still image, but also the story of what happened before and after the shutter closed. Gardiner’s photographs are also of special moments in which the subject is usually caught in a moment of reflection. Possibly the most influenced by Gregory Crewdson, Gardiner’s compositions are scenic and psychologically charged. The one photograph lacking a starring character is the one of the gas station. Similar to Muehlbauer’s images, this one displays the traces of human interaction, and calls attention to the ironic combination of nature references in a densely industrial environment. Gardiner’s compositions are meticulously thought out and include numerous details that viewers can continue to discover upon second and third glances.

This will be the second year that Wirth Art Advisory organizes and curates the Yale Photography MFA Thesis show, which falls in line with Wirth Art Advisory’s commitment to promoting and encouraging the careers of talented, emerging artists. All press inquiries and requests for artist bios and photographs can be sent to Sabrina Wirth at info@wirthartadvisory.com. Any inquiries about artwork in the surrounding galleries, that are not by the Yale Photography MFA graduates should be directed to William Petroni at wp@anatzarev.com.

Click on any of the following photographs to see them larger: