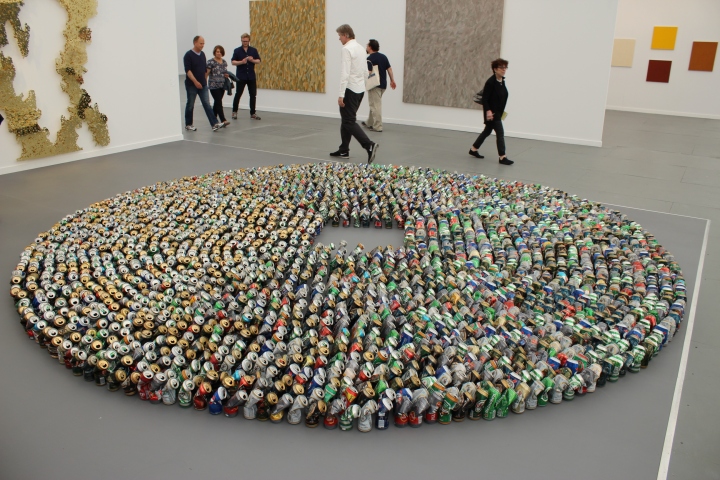 For a fair that’s only been around in NYC since 2012, it sure has become a staple quickly. This year, it includes over 190 of the world’s leading galleries, much larger than Frieze London, and has become an essential component of the international art fair conversation.

Before going into the art, let’s just take a minute to discuss some important topics:

I remember the first time I went to Frieze, I took the M32 bus from Manhattan to Randall’s Island. Not being used to this bus, it really made going to Frieze an adventure- not in the good way. Now everything is so much more sophisticated with ferry transport and frequent shuttles between the Guggenheim and Randall’s Island, that getting to the fair is not even an issue- it’s more of a short excursion from the city. I was struck by how organized everything was, and by how easy it was to go and come back. [side note: I went to Art Miami on Sunday, and it was far more treacherous getting there than it was traveling to Frieze, which is not even on the same island!] So, A+ on getting the logistics right, Frieze team!

The food. I have to say, Frieze wins the prize for best art fair food. In fact, I think I spent more time at Marlow & Sons than I did looking at the booths during the opening night. It made me wonder though, is the food accompanying the art or is the art accompanying the food? I decided to go again on Friday because I knew my perspective must’ve been skewed since I arrived hungry, however the first thing I heard someone say at the information desk was “where’s a good place to eat around here?”

This year, the following options were available to hungry visitors: Court Street Grocers, Dimes with coffee from Café Integral, Frankies Spuntino, Marlow & Sons, Milk Bar, Morgenstern’s Finest Ice Cream, Parlor Coffee, Prime Meats and Roberta’s. Amanda Sharp, who co-founded both editions of Frieze with Matthew Slotover said: “we started with this idea of the fair as a meeting place…One of the great things is to break bread with people.” However, all these great dining establishments in one place might make the focus of the fair— the art— pale in comparison. 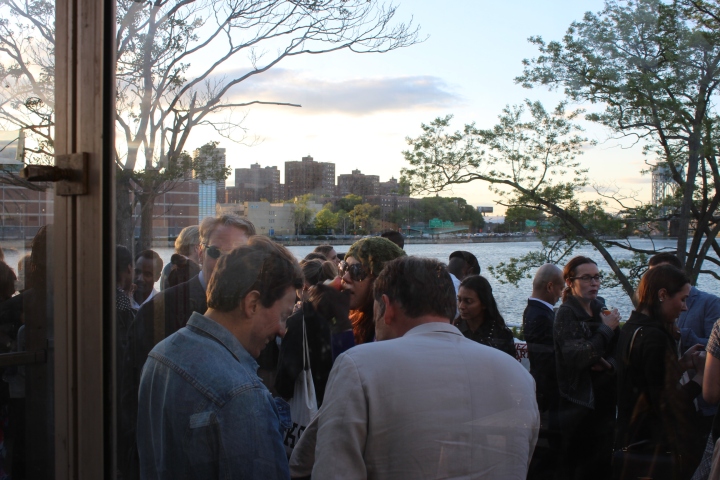 “It’s so hot!” This was probably the most frequent comment I overheard.

I quickly found out that the best places to stop and take a break from the Frieze frenzy was on top of the square air conditioning vents. Before starting my self-led tour, I had already informed myself from reviews about which booths had the best art, and which projects were the least claustrophobic. I wanted to make my own observations however, and explored the fair grounds without any specific strategy. 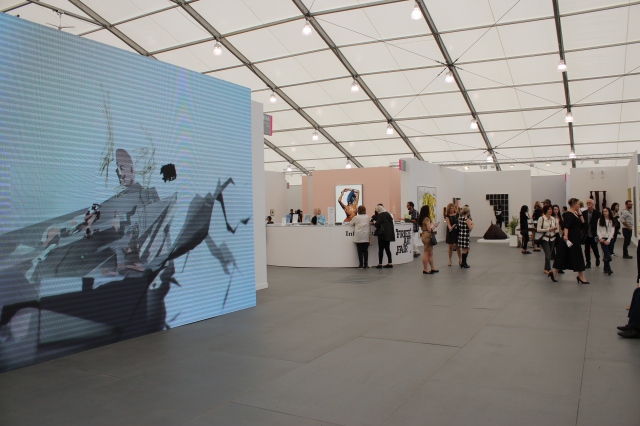 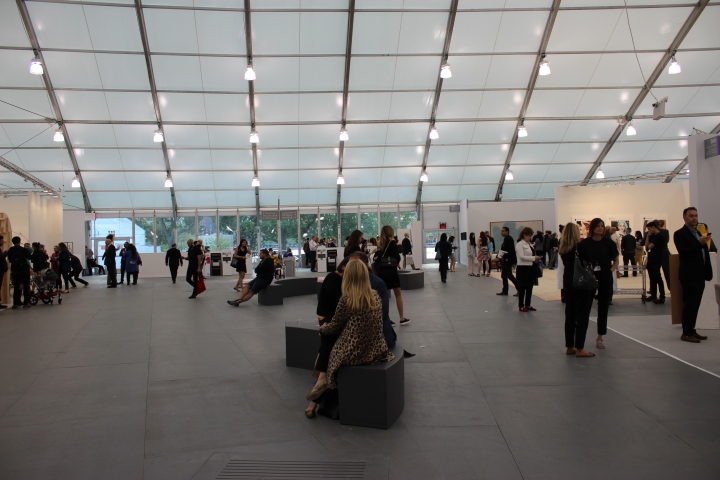 The vastness of the space was at once a welcome change but then shifted into a confusing territory. There is just too much. The food, the skylights, the heat, the limited air-conditioning, the 20-min lines to enter a labyrinth… this felt more like a festival than an art fair. But maybe that’s the direction these art fairs are going into. More about experience and interaction and less about exhibition.

Now, onto the art…

Very impressed with Gagosian’s marketing— even though it doesn’t need any. Before heading into the bus, I was handed a thin, newsprint publication produced by the gallery. I didn’t realize how interesting Richard Prince was until I read his article about his work! No, really, I wasn’t a fan before, and I’m not sure I’m a fan now, but what I am a fan of is his writing! That guy is funny. Wish I hadn’t left my copy in the bus, I would quote some of it.

So, when I got to Gagosian’s massive booth, I wasn’t so surprised that he filled it with Prince’s “instagram portraits”. I was surprised, however, that all of the works sold out (at $90,000) except for one of two guys kissing. [clarification: I’m surprised that so many sold, at that price]

Overall, nothing really caught my eye for very long. I think what impressed me most about Frieze, was well… Frieze. However, below are some of the works (and booths) that did get my attention (and deserved it!):

I would have wanted to get in that massage chair, except that… who wants to stick their bare feet where everyone else’s bare feet have been?

The “Dots” were probably the biggest hit at the VIP preview. Making $20 has never been so enjoyable!

This painting arrested me on the spot. The globs of oil paint layered on the canvas like icing was just intoxicating! I just wanted to touch it to see if the oil paint was still wet. Below is a close-up:

and finally, I just love Anish Kapoor. The simplicity of his sculptures gives off such a poetic effect. In fact, I would say that the most successful booths at Frieze were the ones that highlighted just one or two artists. LESS IS MORE, and in this case, when there is so MUCH, the galleries that took a step back to show a more curated selection were the winners.