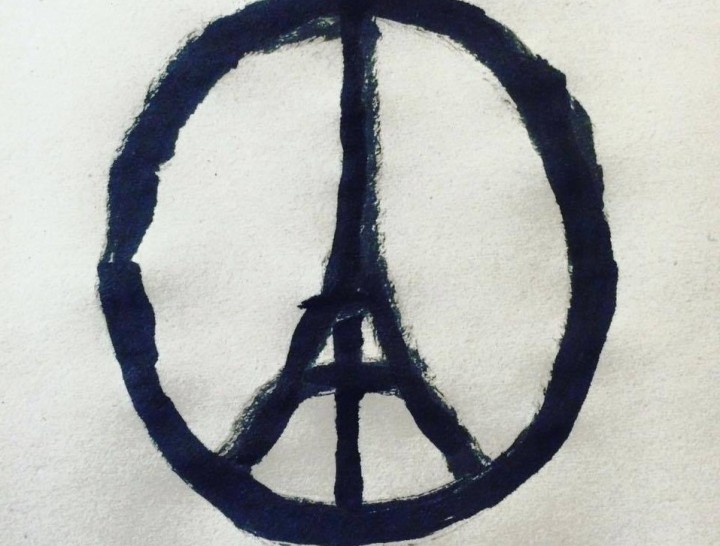 It was only a week ago that I considered buying last minute tickets to Paris for Paris Photo, even though I had been anticipating the international fair for some time. It’s hard to believe that this “city of lights” became a city of terror overnight.

Had I gone to Paris, I most certainly would have considered going out in the very neighborhood that was targeted, because if you’re a tourist in Paris, going to a local soccer game, concert, or out to bars is what you do. The attacks on Friday night were senseless acts against those who love life, against those who were enjoying their freedom to live fully. Yet what these terrorists cannot understand is the resilience of the Parisian people and that with each attack, the world grows stronger in its resolve to remove this hatred.

Without hesitation, artists like Jean Jullien, who drew the viral Peace for Paris logo, and Charlie Hebdo cartoonist Joann Sfar, picked up their pens and drew messages that circulated the world in seconds. There’s something to be said for “The Pen is Mightier than the Sword”.

While we mourn the tragic loss of life, we cannot forget to continue living, loving, creating, and celebrating those who were taken just because they were enjoying their freedom.

I want to leave you with Joann Sfar’s images, which I think are wonderful messages of strength:

“France is an old country where lovers embrace freely”

“Paris is our capital. We love music, drunkenness, joy.”

In the end, life wins.

One thought on “Paris Photo Canceled, but not Paris”